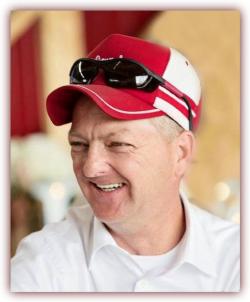 Terry Cleghorn died peacefully on Saturday, October 28, 2017 with family right by his side at the Mazanowski Heart Institute in Edmonton, Alberta.

Terry was born and raised in the small town of McAdam, New Brunswick where he spent a good portion of his life and fell in love with the outdoors. McAdam was where he contributed in numerous ways to the community while raising his young family. After much deliberation, Terry and his family took a giant leap of faith in 2009 and made the cross country move to Fort McMurray, Alberta. He fell in love with his job as a heavy equipment operator at Syncrude and raved often about how it was the best job he'd ever had. It wasn't long before Terry and Cheri had made Fort Mac their home and his coworkers on Team 504 turned into true friends and family.

Terry was a hard worker, a family man who absolutely adored his wife Cheri. They met at the young age of 16 and have been inseparable ever since. All in all they spent an unforgettable 36 years together. If there was ever a definition of soulmates, they would be it. They never took life too seriously and always made time for family and friends. Two peas in a pod, the best of friends, Cheri and Terry were hand crafted by God for one another. Their love made everyone in the room better for just having seen it. Terry absolutely adored his two children Katie and Bradley. Katie is a complete Daddy's girl, and Terry knew it! He treated her like a princess every chance he got and welcomed her husband Brendan into their family with open arms. Bradley and Terry shared a special bond especially through their love of hunting and the outdoors. When hunting season opened you knew exactly where to find the two of them, out in the woods chasing the next buck or building their latest project.

It's hard to not crack a smile when thinking about Terry, even during this time of immense sadness. He took more time to get ready than a teenage girl and cheered as loud as he could at the TV whenever the Habs played. He had a major sweet tooth and never left the house without his iconic red hat atop his head. He had a wild sense of humour and would crack a joke every chance he got. Terry was a man whose personality entered the room before his body. He had a big heart and took the time, with care, to chat with anyone who would listen and would offer the shirt off his back before you could even muster up the words to ask. He would go to bat a million times over for anyone in his family, but would also give you tough love when you needed it most. Terry was a rare breed of human, the type that wore his enthusiasm on his sleeve and whose radiant smile and easy laugh you could get lost in. We will always remember everything that Terry was. A kind man of good character whose presence could fill a room. We'll celebrate his life exactly how he'd want us to, with laughter and stories of the good ol' days. Each time we come across a red hat we will know it is a sign that he's still with us. We will miss him more than words can express. But will never forget our guy, our friend, our Terry the Terrible.

Loved ones that will miss Terry until they meet again are: his wife Cheri, daughter Katie (Brendan), son Bradley, his mother Edna and father Raymond. His brothers Darrell (Lori) and Ronnie (Melanie), sister Crystal (Chris); and many aunts, uncles, nieces and nephews. He will also be missed by Cheri's family: Patricia Porter, Denise (Derrick) MacKay, Shawn (Tanya) Porter, Chris Porter.

A Celebration of Terry's Life will be held at the Voice of Pentecost Church, 84 Harvey Road, McAdam, NB. on Saturday, November 4, 2017 at 2 pm.

Visitation will be held at the church on Friday, November 3 from 2-4 and 7-9 pm.

The family wishes to thank the staff at The Mazankowski Heart Institute at the University of Alberta Hospital for their impeccable, compassionate and genuine care of Terry, along with all the support from friends and co-workers throughout the hospital stay.