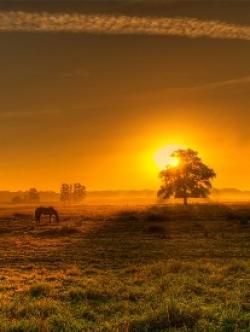 John Gilman Stewart was born on June 9, 1940 in St. Stephen N.B. and lived most of his life on the family's homestead in Pleasant Ridge.

He enjoyed many adventures with his brother Allison throughout their lives - building tree houses in their childhood and going on drives inspecting the land and the waters near their home. John went to agricultural school at the Experimental Farm in Lincoln. For a while, he worked on tobacco farms in Ontario and as a miner in New Brunswick and Maine but his love of home drew him back to the family farm where he worked with his father. Eventually John took over running the business where he raised beef cattle, grew hay, harvested lumber-wood, blueberries and maple syrup. He was an avid reader - his home office is filled with dozens of books and magazines. He loved being in nature and spent hours walking among the hundreds of acres of his farm. An animal lover, he had many four-legged friends, including some special dogs in his life including Ted, Laddie, Thunder, Sandy and Rufus. He was an active member of the Loyal Orange Lodge and a past master of the Sussex Lodge #7 Free and Accepted Masons of N.B.

John was adored by his parents and siblings as well as by all of his nieces and nephews who loved tagging along with him whenever he went to the fields especially at haying and blueberry time. Riding on the tractor was something three generations of kids loved to do with him. He was a wicked Monopoly player and took great pleasure in buying all of the real estate on the board. He also was a genius at brain-teaser puzzles and delighted in solving them when others were left scratching their heads - baffled by how he did it. John knew a thing or two about how to grow crops but he also was a keen stock market investor and could often be found in his office above the kitchen checking on his investments.

He was predeceased by his parents, Gilman and Louise (Mundle) Stewart and brother Allison (Faye).

A Masonic service will be held at the funeral home on Friday at 1:45 pm. Honorary pallbearers include: Calvin Johnson, Kevon Kinney, Arnold Mundle, Robert Burtt, Ann Clarke and Paula Stewart-LeBlanc.

For those who wish, donations may be made in John's memory to the Shriners Hospital or to a charity of one's choice.