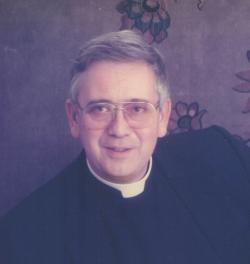 Archdeacon Harding was educated in public schools in and around his hometown of Harriston, Ontario, earned his Bachelor of Arts degree from Huron College at the University of Western Ontario, and his Licentiate of Sacred Theology from Bishop's University Divinity School. While serving as curate at Christ Church Cathedral in Fredericton, he met his wife, Margaret, then relocated to New Brunswick, where he began his ministry in the Diocese of Fredericton, serving parishes in Zealand, Edmundston, St. Stephen, Woodstock, Kingston and Saint John. He was an examining chaplain to the Bishop of Fredericton, and served on the Advisory Committee for Postulates for Ordination (ACPO). He had a long association with the Diocesan School of Church Music, and was active in the civic life of every community he served. For the 150th Anniversary of the Diocese of Fredericton, he wrote a history entitled Citizens with the Saints: A Brief History of Anglicanism in New Brunswick. While he was Rector of St. Luke's in Woodstock, he was made a Canon of Christ Church Cathedral, and was later appointed Archdeacon of Saint John, where he ended his active ministry at Trinity Church.

In retirement, he served parishes in southwest New Brunswick and Eastport, Maine, as well as at his new home in Peterborough, Ontario, acting as Honourary Assistant at St. John the Evangelist.

Lyman is survived by his devoted wife, Margaret (Stevens), his three daughters Victoria (Bill), Anne (Chris), and Jennifer (Chris), his twin grandchildren, Amelia and Nate, his step-grandchildren Jessica, Mathew and Elyssa Hong, his niece and nephew, Jane Wicks and Gerry Church, and last but not least, his pal, Red-Puppish-Dog.

Donations to the Primate's World Relief and Development Fund or any charity of choice will be appreciated by the family.