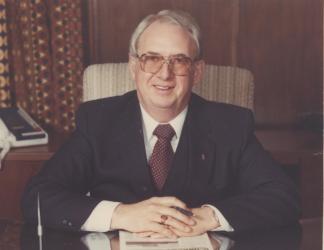 He was predeceased by his wife of 66 years, Eileen.

Leland spent his early years working in the woods, running a lumber camp while still a teenager. In the 1950s he was a heavy equipment operator and in the 1960s he was co-owner of a clothing store in St. Stephen. In 1967 he was elected as one of four MLAs for Charlotte County, and was subsequently was reelected to Charlotte West, serving 20 years in the Legislature. While in the Legislature, he served as Deputy Speaker, Minister of Tourism and Chair of the N.B. Power. He was devoted to his constituents, whether they voted for him or not. He found employment for many, and interceded with government when people had problems that he could fix. It was difficult to have an evening meal without a phone call or someone showing up in the driveway looking for help, and he always gave it. It is fair to say that he left politics with his respect and integrity intact, and continued to help when he could even out of office.

Through everything, and right to the end, his sense of humour never left him. Leland loved his family and was as devoted to it as he was to politics, never letting one take over the other. After politics, he returned to his love of the woods. He loved to hunt and fish. In 1989, with help from a friend, he cut the wood and built his camp ""Esoonac"" where he spent many happy hours with Eileen, often entertaining large numbers of family and friends. He also started a Christmas tree farm, working it into his 80s. For many years, he brought the Grade 5 children from McAdam Elementary for a day of orientation in Christmas tree production and a meal at Esoonac.

The family extends appreciation to the staff of Windsor Court, who provided care and compassion during his time there. He became one of their family.

Family will receive friends at the funeral home on Thursday from 12 Noon until time of service.

For those who wish in lieu of flowers, remembrances to the charity of ones choice would be appreciated by the family.