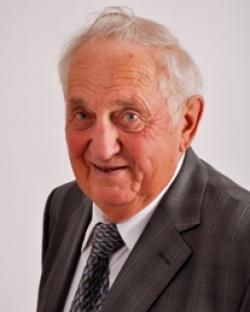 Kenneth LeRoy Holmes passed away peacefully at his home on Dec. 29, 2016. He was born March 2, 1930 in McAdam NB, a son to the late Preston Randall and Mamie Alice (Hatt) Holmes.

Ken was predeceased by his wife of 57 years, Emily Josephine (Hooper) Holmes, as well as three of his four siblings.

Ken was well known locally and across his home province as a kind and generous man who would help anyone in need. He worked hard to provide for his large family, from driving transport truck, to working at an Irving bunker station, to finally settling on his career as a beloved and respected municipal police officer with a reputation for being able to defuse any tense situation. Many times, Ken was called by special request of a victim or perpetrator, and he always responded even if he wasn't on duty. His love for people and his community permeated all he did. In spite of his full family and career, Ken worked diligently to start an ambulance service for his growing community when none existed. It began as a completely volunteer service, funded through donations and Ken's own pocketbook, named Ken Holmes Ambulance Service after its founder. Years later it underwent an ownership and name change, being taken over by Ken's oldest son under the name Good Samaritan EMS, by that time with a complement of full time staff. In 2007 the service that began so humbly as a gift to the community had transitioned into part of the provincial ambulance system that exists today.

Ken was also an active member of his church, of which he was a founder. His love for his family and community was surpassed only by his love for his Lord. Ken's faith saw him through all the rough times that life brought his way.

Resting at the Old Ridge United Pentecostal Church, 8962 Route 3, Old Ridge, NB. from where the funeral service will be held on Monday, January 2, 2017 at 11 AM.

For those who wish, remembrances may be made to a charity of one's choice would be appreciated.