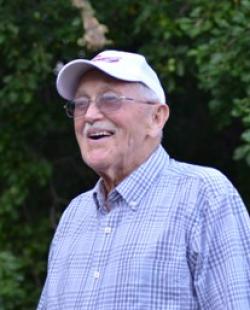 Jim was a carpenter by trade and worked out west many years. When he returned home he started a mill, which was eventually sold and became known as the Great Northern Fence Company. He worked there until he retired. Jim was a quiet, gentle man, who enjoyed a long, happy life with his wife and family. He went camping in the summer with his wife and sons, Jim Jr. and Danny, when the boys were young. In the winter, they spent time at his camp in Andersonville. They went snowmobiling and relaxed. Jim loved and respected his wife and family. They had many gatherings, including the yearly family barbecue, Thanksgiving, Christmas, weddings and many birthday celebrations. The past few years, he went to the Farmers market on Friday, sitting with his nephew Bobby, enjoying his day. In earlier years, he went to Dinsmore's Hardware on Friday evenings, where he met with his friends and discussed the weeks events. Sunday was the day he visited his sister, Melva. When he arrived home, some of us often stopped for a visit and coffee. He also loved going to the lumber jack competition and the horse pulls during festival week. Jim was loved by his children, grandchildren and great grandchildren. Each one of us has our own special memories. Dad has left a wonderful legacy for us. He will be missed.