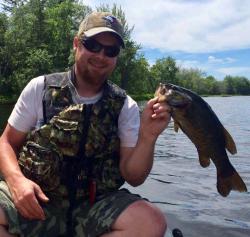 Adam was born May 22, 1984, in Saint John, NB, and lived most of his life in St. Stephen - but always made it clear that he was from Milltown.

He is survived by his daughter Grace and son Keaghan and their mother, Jessica Porelle, all of St. Stephen, his mother, Anna James, of Bethel, his grandmother, Geraldine McShane, of Milltown, father Robert James, of Comox, BC, grandmother Emily James, of Niagara Falls, Ont. and sister Andrea Henderson (Mike), and niece, Blair Henderson, of Oromocto, NB, and many other friends and family members.

Adam graduated from St. Stephen High School in 2002. It took some time for him to find his vocation but once he decided he wanted to be an electrician - he knew he found a career he would love. He graduated from NBCC-Saint John in 2013 and earned his journeyman certificate in March 2015. He worked at Disher Homes and truly enjoyed his job and loved his co-workers. Adam was an outdoorsman who loved to hunt, fish, canoe and relax around the campfire. He was an avid reader and he loved music. He loved going to concerts - most recently, he saw James Taylor in Saint John in May with his sister, Andrea. They sat in the second row. However, more than anything else, Adam loved to be with his kids. They were the most important thing in his life. They were his world. He shared his love for reading and for the outdoors and took them fishing often. Those who really knew Adam knew that he was affectionate. He loved his family and his friends and he had many close relationships. He wasn't afraid to show his affection either. Adam was a hugger and people loved getting a great, big hug from Adam.

Funeral mass will be celebrated at St. Stephen's Roman Catholic Church, Milltown, NB. on Friday, October 21, 2016 at 11 AM.

In lieu of flowers, if so desired, please consider sharing Adam's love of reading by donating a children's book to the Milltown Elementary School or a public library.