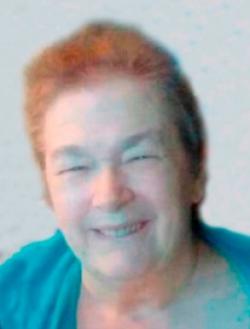 Janet was born in Bexhill-on-Sea, East Sussex, England, daughter of the late Stanley and Lilly Pocock.

Janet came to St. Stephen, NB. in September 1966 and soon thereafter in December 1966, married John Beverly Moore (Bev), who predeceased her in January 2007.

Janet worked at Star-Kist Tuna Inc. for many years. Janet then worked in a few greenhouses around St Stephen. Janet also did some knitting for Cottage Craft until she retired at age 62.

A graveside service will be held at the Moores Mills Cemetery, Moores Mills, NB., Sunday, October 2, 2016 at 3 PM.

By request , there will be no visitation.

For those who wish, remembrances to the Heart and Stroke Foundation, Diabetes Foundation, Charlotte County SPCA or a charity of one's choice would be appreciated by the family.