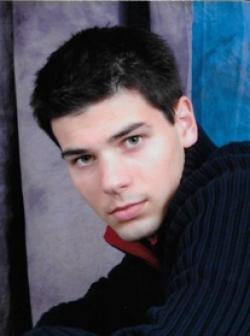 He leaves his wife, Edith, and his son, Theodore.

James was born in London, Ontario, and moved with his parents to Rothesay, New Brunswick in 1987. His parents were Dr. Mark Johnston and Dr. Elizabeth McInerney. His brother David was born in 1989 and his sister Emily in 1993. In 1997, his family moved to Sioux City, Iowa, USA.

He showed early scholastic promise. He won the Iowa National Geography Bee and represented the State in Washington, DC in 1998. He graduated from North High School in Sioux City in 2003 with many advanced courses and won the Iowa Governor's Medal and a National Merit Scholarship. He attended University of Chicago where he studied Philosophy, graduating in 2007. He gained a Fulbright Scholarship and studied and taught in Vienna, Austria for 2 years. He moved to London, England and graduated from the London School of Economics with a Masters in Economics in 2011. He subsequently obtained another Masters' degree at the University of Paris, and won funding to continue his studies at the Doctorate level. In Paris, he met his beloved Edith; they were married September 24, 2014 in a beautiful ceremony at historic Eglise Saint-Medard in Paris. Their son was born August 31, 2015. James and Edith named him Theodore, which means"Gift of God".

James was an accomplished musician and played classical piano. He spoke French and German fluently. He studied Latin and translated classical works of philosophy and theology. He read widely and seriously. He enjoyed hiking, skiing and cycling. He made friends wherever he went, which included a wide circle of people from diverse cultures and countries. James made a difference in the lives of many people, and his loss is deeply felt by the family and friends whom he loved and by whom he was loved in return.

James was cremated at Pere LaChaise cemetery in Paris on February 5th, 2016. His ashes are being brought home to St. Stephen, where a funeral Mass will be celebrated by Father Paul Doucet at Holy Rosary Catholic Church on Friday, August 5, 2016 at 11:00 AM.

He will be laid to rest with his paternal grandparents in the Milltown Catholic Cemetery.

He shall not grow old, As we who are left grow old. Age shall not weary him, Nor the years condemn. At the going down of the sun, And in the morning, We shall remember him.