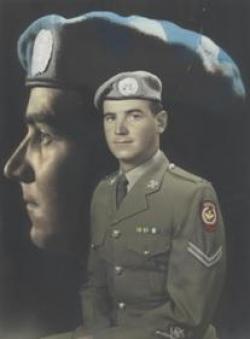 Bev. was a former Canadian Peacekeeper with the PPCLI. He was with the regular forces from 1962-1971, serving as a sniper and as an anti-tank platoon member. He also served in Germany from 1963-1966, only to return later to serve in three mechanized commandos in Baden Germany. After leaving the services he worked for NBLCC for a period of time, before deciding to switch careers and trying his hand at sales. He worked for several years as a beauty supply salesman, then as a car salesman for J. Clark & Sons in Sussex, before retiring and moving to St. Stephen. Over the years, Bev. has been a past president of and tireless worker with the Sussex Legion. He was an active member of the PPCLI Atlantic Branch.

Bev. was always helpful, thoughtful. kind, caring, giving, unselfish, and a loving person. He always had a joke for you to try to put a smile on your face. The world was just a better place for having known him. We thank God every day for the privilege of having him in our lives for the time he was here.

The Royal Canadian Legion Branch # 20, Sussex, NB. will conduct a Tribute to A Veteran Service on Saturday at 2 PM.