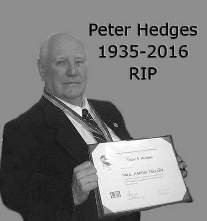 He came to Canada in 1965 with his two children and began his career as a tool and die maker.

He is survived by his loving wife, Glenna (Gill); children; Gareth, Karen (Arsenault), Katrina (Dunwoody), and Melissa (Hedges); Grandchildren; Austin, Petra, Carter, Hudson and Griffin; Great Grandchildren Aven Everleigh, and Abby. He is also survived by many other family members in England.

For those who wish remembrances to the Heart and Stroke Foundation, St. Stephen Youth Soccer or a charity of one's choice would be appreciated by the family.

Special thanks to the staff at CCH and the many friends who were there to support Peter.