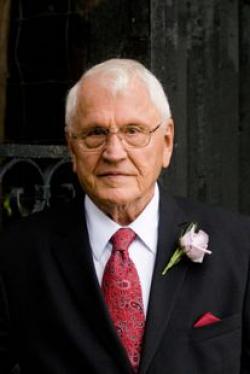 On the morning of March 18, 2016, our father Rene Bousquet stated, "There comes a time", before passing away peacefully at Charlotte County Hospital.

Born in 1919 and after growing up in the Eastern Townships region of Quebec, Rene enlisted in the RCAF during WWII as an airframe mechanic, and continued to serve his country for 25 years as an aerial photographer post-war before transitioning to the federal public service in surveys, mapping, and satellite imagery.

He and his wife Bertha (Hill), who met right after the war and were married in her hometown of St. Stephen in 1946, also retired here in 1980, where he pursued his passion for gardening. Throughout his life, Rene served the communities he was a part of, continuing to do so here as an active volunteer at the Church of the Holy Rosary; and in multiple roles, including that of President, at St. Croix Br. #9 of the Royal Canadian Legion. His robust service ethic and strong sense of humanity and support made him a role model and hero to his family and others.

With children and grandchildren of our own, we still aspire to be like our Dad.

Mass of Christian Burial will be celebrated on Tuesday March 22, 2016 at 11 AM from the Holy Rosary Catholic Church, Union St., St. Stephen, NB.

The Royal Canadian Legion St. Croix Branch #9 will conduct a Tribute to a Veteran Service at the funeral home Monday evening at 6:45 PM.

Our family is so very grateful, as our father was, for the loving care, support, and fellowship from the staff and residents of Lonicera Hall, the services of the many health care professionals from the Extra-Mural Program, and the exceptional end-of-life care provided by the nursing, medical, and other staff of Charlotte County Hospital, who ensured his last moments were dignified and free of concern.

We also wish to sincerely and emphatically thank his Legion family for all their helpful and thoughtful support through his last years.

In lieu of flowers, our family would appreciate donations directed to Lonicera Hall (www.lonicerahall.com), the Charlotte County Hospital Foundation (cchfcares.ca), or the Legion Poppy Fund.