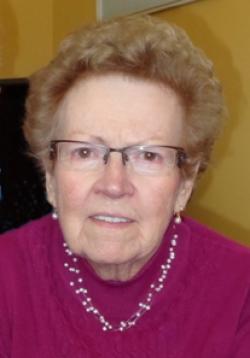 The daughter of the late Rowland and Rachel (Powell) Hargest, she was born in London, England on March 28, 1926.

Her parents emigrated from Wales when she was a child and the family bought a farm just outside Woodstock, NB. When she was eighteen, she moved to St. Stephen to work at the cotton mill. She often travelled to work in a taxi operated by Paul Lee, who told her that when his son, Doug, came home from the war, they should meet. They did meet, and as the saying goes, the rest is history. After her children were born, Pat was a stay at home mom for a few years. She decided to return to work and worked in several businesses in St. Stephen - Garcelon's Stamp Company, The Hat Box, The Tally-Ho and Sears, from where she retired as manager. Over the years, she belonged to the Any Night Club, a group of friends who met to play 63's. She bowled, curled, played darts and golf. She was a member of the Ladies Auxiliary of the Royal Canadian Legion, having served as president; she was a member of the Eastern Star, having served as Worthy Matron and she was a member of the former District 23 School Board. In recent years, she enjoyed playing bridge. Family gatherings were a special time for her and she was very proud of her grandchildren and loved every opportunity to see her great granddaughters.

Pat was predeceased by her husband, Doug, her daughter, Lorna, her brother, Ronald Hargest and her sister, Lorna (Hargest) Tompkins.