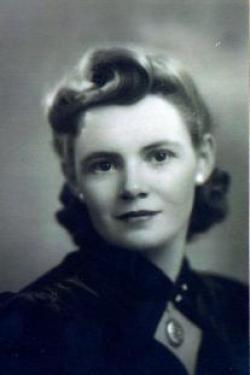 The McCracken Family is sad to announce the peaceful passing of Sadie Elizabeth (Howe) McCracken on October 3, 2015 in her 95th year.

Sadie was a much loved and loving daughter, wife, mother, grandmother, great-grandmother, sister, aunt and friend to one and all. She was without a doubt the backbone and guiding light of her family, the glue that kept it all together.

Born in Welsford, NB on July 21, 1921, she spent her formative years at Armstrongs Corner and Welsford before marrying James C. McCracken of Fredericton Junction and moving to McAdam in 1948. In addition to raising her family and providing tremendous ""behind the scenes"" support to her husband James and her family, she was actively involved in St. George's Anglican Church as a worshiper, choir member and guild treasurer for many years. One of her favorite outings was to get together with the "local girls", the Club they called it, for an evening of Auction 45s, snacks and chat. She was also active in her community, participating wherever she could lend a helping hand; even to the extent of being made an honorary Boy Scout for her substantial support to their organization. Although not likely to get directly involved in ATV or ski-doo expeditions, she rarely hesitated to go salmon fishing or entertain family and friends at the family "camps" at Peltoma and South Oromocto Lakes. But through it all, her primary role was to support and encourage her immediate and extended family, and that she did! In short, despite her passing, her unselfish devotion to her family through the years will ensure the Family Circle will remain Unbroken!

Sadie was predeceased by James, her husband of 66 years, and her parents Percy and Frances (Woods) Howe, her sister Mildred (Queen) and brothers Edward, Gordon and Ross Howe. She leaves behind her sons Danny (Evelyn) of Fredericton, NB, Tony (Rose) of Bridgewater, NS, David (Jane) of Ottawa, ON, Paul (Verna) of New Glasgow, NS and daughter Karen Dawson (Cameron) of Welsford, NB, 18 grandchildren, 35 great-grandchildren and many more nieces, nephews and friends.

Personal condolences may be sent to the family online at www.mehanfuneralhome.ca

The funeral service will be held at St George's Anglican Church, McAdam NB on Friday October 09 at 2 PM.

There will be visitation at the church from 1 PM until the time of the service.

Interment to follow the service at Rockland Cemetery, McAdam.