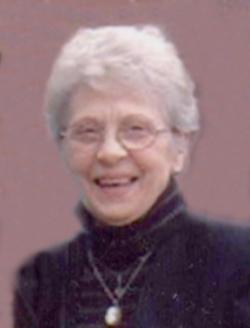 LITTLE- At the Wauklehegan Manor, McAdam, NB, May 17, 2015, Josephine Theresa Little passed away.

Born on the family farm in Yoho Lake, NB on July 16, 1927, one of 12 children, Theresa moved to McAdam in the late 40's and worked at the telephone office. She met Jack Little and they were married in October, 1952. Theresa and her husband Jack worked at the family hardware store in McAdam until the early 80's. Theresa also enjoyed working at Kings Landing until she was in her 70's. Theresa was an active member of St. Clement's CWL.

Predeceased by her husband Jack Little, one grandson, Geoffrey Little and nine brothers and sisters.

Mass of Christian Burial will be celebrated at St. Clement's Roman Catholic Church, Highland Ave., McAdam, NB on Wednesday, May 20, 2015 at 11 AM.

For those who wish, remembrances to the Alzheimer's Society, Canadian Cancer Society or a charity of one's choice would be appreciated by the family.