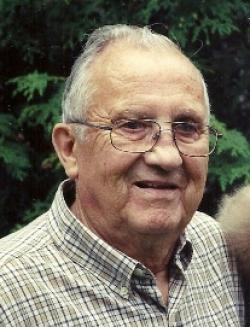 John Allison Page of McAdam, NB passed away on May 4, 2015 at the Wauklehegan Manor, McAdam, NB.

Born in Woodstock, NB on September 6, 1921, he was the son of the late John (Jack) and Elizabeth (Ball) Page. Although he moved to McAdam as an infant he had fond memories of Woodstock and visits to the farm, where his maternal grandparents lived.

He was a World War II veteran, serving overseas as a Corporal and then a Sergeant in the RCAF. His service took him to England, France, Belgium, Holland and Germany. It was in England in 1945 that he met his future wife Beryl Price from Sheffield, Yorkshire. He returned home after the war to his job at the CP Rail, where he worked as a boiler maker until 1960. Then as an entrepreneur, he started his own business, McAdam Auto Body Repairs, until the mid 1980's. Also during that period he worked part time as a custodian at the St Croix Customs & Immigration Building. He served as a McAdam Village Councillor for 7 years, a director on the MacLean Memorial Hospital Board, vice-president of the Wauklehegan Manor Board and a member of the McAdam Legion BR#7 for 71 yrs. John had many interests including reading, gardening, flying single engine planes, curling and travelling. Most of all, his interest was his love of family and orchestrating many family reunions. He was very talented in metal and wood work.

Upon his retirement he constructed many items from wood including grandfather clocks and various pieces of furniture.

He is predeceased by his wife Beryl of 62 yrs in 2009, his brother Alfred in 1996, sisters-in-law Charlene Page and Pam Price and brothers-in-law, Joseph Gillis, Glendon Caulfield, and Eugene Moffitt and Derwent Price.

Following the Legion Service visitation will occur from 1:00 pm to 2:00 pm with the funeral service at 2:00 pm.

Interment at the Rockland Cemetery following the service. Memorial donations can be made to St. George's Anglican Church McAdam, Wauklehegan Manor, McAdam or the charity of your choice.