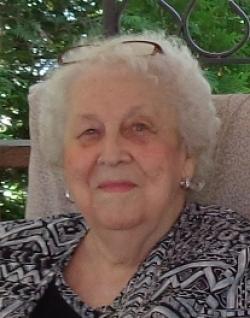 Pauline Frances Messer - 88, of Saint John, NB. It is with great sadness that we announce the passing of our dear mother, grandmother and great grandmother at Valley Regional Hospital, Kentville, NS on February 17, 2015.

Mom was born on September 24, 1926 in Tower Hill, NB to Ethel (Brown) and Bill Cameron. She attended school in Tower Hill and St. Stephen, NB and later became a hairdresser. On June 17, 1946 she married Robert "Bob" Messer and they settled on the Ledge Rd. in St. Stephen. They later relocated to Truro, NS for Dad's work and eventually retired in Saint John.

Every summer was spent entertaining family and friends at their cottage in Oak Bay, NB where many a barbeque and night of cards was enjoyed. Mom loved nothing more than a good game of cribbage and doing word find puzzles. She had a passion for gardening, flower arranging and decorating for all the holidays. She was a faithful fan of the Toronto Blue Jays and celebrated her 85th birthday attending a game at the Toronto Sky Dome. Mom loved vacationing throughout the Maritimes and spending time with her children and grandchildren. She was a wonderful caregiver to our dad and our grandparents during their time of need. Mom was a member of the St. Stephen Chapter of the Order of the Eastern Star for 63 years.

In lieu of flowers, a donation may be made to the Canadian Cancer Society or a charity of one's choice.