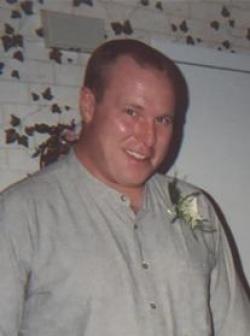 RICHARD- It is with profound sadness and broken hearts the family announces that Jeffrey "Heapster" Neal Richard passed away after a courageous battle with cancer on April 11, 2015 at Bobby's Hospice, Saint John, NB.

Jeff was a graduate of St. Stephen High School Class of 1988 and a UNB graduate with a Bachelor of Science degree in Mathematics. This led to a career as a Survey Tech working on the construction of the Confederation Bridge to PEI. After the completion of the bridge project, he returned to college in Lawrencetown, NS to further his education in Surveying. He spent many years travelling to locations such as, Massachusetts, Maine, Vancouver, New York, California and Mississippi for different bridge construction jobs. After many years of travelling for work he and Shari settled in Saint John, NB where he started a new job with Canada Post.

Jeff was an avid rugby player and he especially enjoyed his time playing with the St Stephen "Swines".

Family and friends are all invited to attend a celebration of Jeff's life at the Moores Mills Community Hall,24 Moores Mills Road, Moores Mills, NB on Wednesday, April 15, 2015 from 6-8 PM.

Jeff was passionate about all animals, so for those who wish, remembrances to your local SPCA would be appreciated by the family.