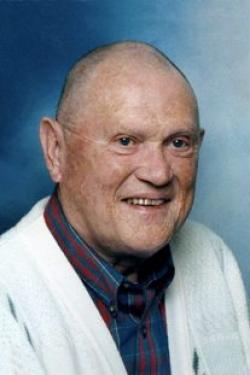 Born November 6, 1927, Frank was the second of 4 boys of the late Gladys and Alvin Raymont of Essex Ontario.

Frank is survived by his daughter Barbara; son, Bruce; daughter in law, Allison and three grandsons, Blake, Garrett and Cameron. He is also survived by his youngest brother Bob, as well as several nieces, nephews, in laws and cousins.

Frank was preceded in death by his wife, Alice and two of his brothers, Chuck and Bill.

Frank, a retired purchasing agent , spent most of his career at Firestone in Hamilton, Ontario, where he and Alice raised their family. They retired on Tower Hill in Alice's family farm in 1989. They entertained friends and family alike at their Oak Bay cottage during the summer and spent several winters in Florida. Frank was an avid angler and hunter and enjoyed re-telling stories about his adventures. He was a serious man with a tender heart when it came to his wife and children. Frank was a very social man who loved the company of good friends and his family. You knew where you stood with Frank. He will be remembered for his knowledge and love of history, mainly military history, especially infantry and cavalry, as well as his love for a great western (noted by his collection of Louis L'Amour books). Books and Frank went hand- in- hand. He had a full and wonderful life.

By request there will be no visiting hours held.

For those who wish, remembrances to the Moores Mills Cemetery, Diabetes Association, Heart and Stroke Foundation or a charity of one's choice would be appreciated by the family.