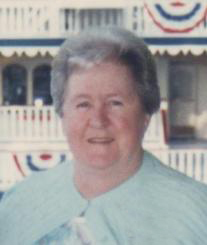 Wife of Aubrey R Moffitt of McAdam, NB and daughter of the late Harry and Violet Christina (Phelps) Donovan.

Resting at the Rockland Drive United Baptist Church, McAdam, NB from where the funeral service will be held on Tuesday, January 13, 2015 at 2 PM.

For those who wish, remembrances to the Lions Tabatha's Comfort Quilts, Diabetes or Cancer Society would be appreciated by the family.