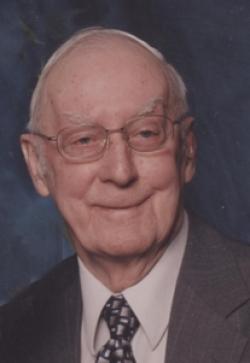 Twin brother of the late Horace; his sisters, Sylvia and Ola.

Beloved husband of the late Marguerite (Anderson) Lindsay (2009) and his daughter, Joyce McGee (Reg) (1991). Survived by his daughters; Mary Swallow (Larry), Winnipeg; Sylvia Gardner (Bernard), DeBary, Fla; Joan Leech (Philip), Fredericton; sons, Gerald (Nikki) St Stephen; and Karl (Emily) London, Ont; 13 grandchildren and 30 great grandchildren. Maurice married Marguerite May 1939. They reached a milestone 70th wedding anniversary celebration with family. He joined CP Rail in 1939 as a brakeman retiring as Yard Master 40 years later. He was a solid left wing hockey player in his early 20's when the hockey team were the 1938-39 Pickrell Trophy Winners for McAdam C.P.R. A.A.A. team. His interests were gardening and watching sports, especially the New York Yankees as well as hockey. Maurice was a gentle, easy going, kind and friendly man to all and a loving father who will be greatly missed by his family and friends. Maurice was retired for nearly 36 years. In their early retirement years, Dad and Mom decided they wanted to be entrepreneurs and owned/operated M&M Variety store in McAdam. After a few years they decided it would be better to sell the business and travel instead to their home in Florida until illness prevented this annual event.

The family extends a special thanks to the incredible caregivers at Lincourt Manor for their kindness and compassion during his nearly 6 years of stay.

Interment will be at Rockland Cemetery, McAdam, NB at 4:15 PM. In lieu of flowers, please consider a donation to the Lincourt Manor or a charity of your choice.