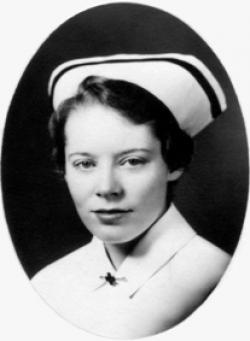 Myrna was predeceased by her mother Helen Innes (nee Hawthorne).

Born in Halifax, NS in 1935, Myrna graduated from McAdam High School in 1953 and was valedictorian. She graduated from nurses training at the Saint John General in 1957. After graduation, she worked at the Shriners Children's Hospital in Montreal, PQ as well as Sherbrooke Hospital in Sherbrooke, PQ before marrying and returning to live in McAdam, NB. She continued to work as a nurse at Harvey Community Hospital until MacLean Memorial Hospital opened in McAdam, NB. At the end of her nursing career, Myrna had first become Director of Nursing then on site administrator for Wauklehegan Manor in McAdam. She performed her duties as a consummate professional and was highly regarded by all who knew her. In her private life, she enjoyed knitting and baking as well as watching the New York Yankees and spending time with her grandchildren. Her faith was important to her and she began every morning reading her bible and the "Daily Bread" in her favourite rocking chair. She volunteered at Rockland Drive United Baptist Church, Lakeland Industries and, in later years, Wauklehegan Manor. Throughout Myrna's life she demonstrated the importance of hard work, perseverance and devotion to family. She faced her many challenges with resilience and determination. Her quiet strength and unwavering dignity will be remembered by all.

Due to inclement weather today, November 27, 2014 the Funeral service will be held at Rockland Drive United Baptist Church, 32 Rockland Drive, McAdam, NB on FRIDAY, November 28, 2014 at 3pm with a reception following in the church basement.

In lieu of flowers the family requests donations in memorial at Rockland Drive United Baptist Church. On line condolences can be made at www.mehanfuneralhome.ca Funeral arrangements are under the direction of The S.O. Mehan & Son Funeral Home Ltd., 23 Main Street, St. Stephen, NB.