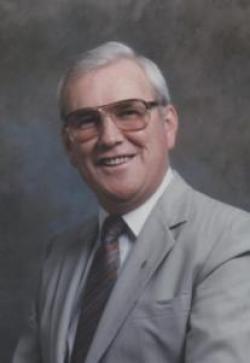 GOGUEN- Ovie Goguen, age 86 years, passed away peacefully surrounded by his loved ones at the Charlotte County Hospital in St. Stephen, N.B. on November 12, 2014, following a courageous battle.

His son Peter predeceases him, along with his father Alphee Goguen of McDougall Settlement, N.B., his mother Delia (Richard) Goguen of St. Andre, N.B., sisters Theresa (and her husband Francis) and Rosie, brothers Leo and Laurie and his sister-in-law Roma.

Ovie enjoyed a lengthy and successful career with Sears across Canada. He was also a founding partner of Can-Tex Entertainment, which introduced Blockbuster Video to Canada.

Mass of Christian Burial will be celebrated at St. Stephens Catholic Church , 407 Milltown Blvd., St Stephen, NB at 10 a.m. on Monday, November 17, 2014, followed by a reception at St. Patrick's Hall.

In lieu of flowers, if desired, memorial donations to support the creation of the Charlotte County Hospital Mammography Unit, or a charity of choice, would be appreciated by the family.