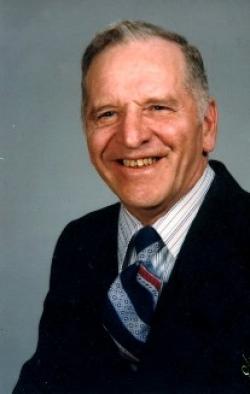 BABINEAU- Marcel E. J. Babineau, 92, passed away November 12, 2014 at Cummings Health Care Facility in Howland where he resided and received exceptional care for the past 16 months.

Marcel was born in Rogersville, New Brunswick, Canada on January 10, 1922, a son of the late Charles and Marie (Barrieau) Babineau.

Later, the family moved to Milltown, New Brunswick. Marcel was a loving husband and father. He had great faith and was a devout Catholic."There is no sense worrying... I live one day at a time" he often said. Growing up during the Great Depression, Marcel developed a strong work ethic which he carried throughout his life. He earned his first wage, a nickel, at the age of eight. He worked many odd jobs. In time, Marcel earned enough money to buy a bicycle. Dressed in his Sunday best white shirt and black pants he loaded fresh fish into his bicycle basket and delivered the fillets to more than a dozen customers every week.

Marcel served in the Canadian Armed Forces during World War II, earning several decorations, campaign stars and medals. Like many veterans, Marcel did not talk much about his military experiences, but a nephew, named for him, recalled a heroic event. Marcel was on watch on Devil's Island at the mouth of Halifax Island when he spotted a German U-boat periscope entering alongside an allied vessel. He reported the sub to the command center, the vessel sharply turned, ran over the top of the sub sinking it. Marcel served in the 15th Field Regiment of the Royal Canadian Artillery. He was in the third wave of the Normandy Invasion in 1944 and his duty took him across Europe. He was scheduled for paratrooper training in Texas but World War II ended before his deployment to the Pacific. He was honorably discharged. Returning to civilian life in Milltown, New Brunswick, Marcel went to work at the Cotton Mill, the town's largest employer.

Later, he built a home and in 1952 he married Catherine Sampson. The couple started their family. Uncertainty at the Cotton Mill forced Marcel to leave his young family and look for other work before the mill closed in 1957. A new job at Great Northern Paper Company brought Marcel and his family to East Millinocket where he worked for nearly 29 years. He was a member of the United PaperWorkers International Union Local # 37. He retired in 1985.

The family thanks the entire staff at Cummings Health Care for the love and great care they gave Marcel and thanks Dr. Nicole Smith.

In lieu of flowers, the family asks people to volunteer or visit people at their local nursing homes.