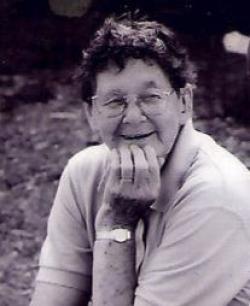 DOON, Ethel Mary "MOLLY"-It is with great sadness that we announce the passing of Molly Doon, who died peacefully on Saturday September 27, 2014 at the age of 92.

Molly was born and raised in Kildare Capes, Prince Edward Island. She was educated at Prince of Wales College in Charlottetown and worked in the Ellerslie Research Station until 1942. She came to St. Andrews to work at the Biological Station in 1942.

She met George Doon and in 1948 they married and raised 8 children together. Molly was a devoted member of St. Andrews Catholic Church until recent years, and was a member of the Catholic Women's League for over 50 years. For the annual summer bazaar, the car was often filled with fresh baked goods for the food table (some of which Dad often purchased and brought back home!) She walked with the "girls" every weekday morning for over 25 years and looked forward to the visit over coffee afterwards. She loved going "tubing" on the upper St. Croix River and often walked up Chamcook Mountain after Thanksgiving Dinner with the family. She savoured time spent at her "camp" on the St. Croix River, was an expert crossword aficionado and thoroughly enjoyed the many family gatherings.

She was a wonderful Mother, Grandmother and friend to many. She is lovingly remembered by her children, John (Rosalind), Mary (Ron), Geordie (Donna), Andy (Michelle), Bob (Gail), Pat (Cathy), Anne (James), Ellen (the late Greg Mansfield) and her 11 grandchildren, Andrew Doon, Gillian and Patrick Forbes, Michael and Thomas Doon, Geordie and James Doon, Erin and Graham Doon, Molly and Eddie Tingley and her two great-grandchildren Quenton and Carolyne.

Mass of Christian Burial will be celebrated at St Andrew's Roman Catholic Church, St Andrews, NB on Wednesday, October 1, 2014 at 11 AM.

For those who wish, remembrances to the Charlotte County Cancer Society, Passamaquoddy Lodge or a charity of one's choice would be appreciated by the family.