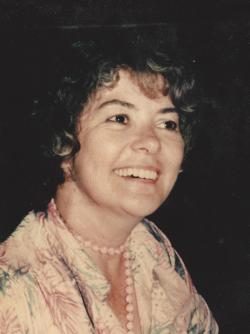 On May 25, 1936 in Oak Hill NB, Laureen was the first born of Alexander and Vera Smith. The family moved to Dewolfe Corner and by her mid-teens she had caught the eye of her future husband of 61 years, Ross Merrill.

Their life together began on March 27, 1952. The next seven years of their lives saw them introduce three children into the world; Steven Ross, Elaine Vera and Rory Alexander. During these early years Laureen proved to be a supportive young wife and a loving mother as the family relocated overseas and across Canada. On March 9, 1969 Laureen gave birth to their fourth child, Bryan Roger. No matter where they lived, people were drawn to Laureen's kind, sweet and loving nature. In the late 80's she graduated as an RNA from St. Andrews and began working at Lincourt Manor in St. Stephen.

Laureen was affectionately called "Nanny" by all five of her grandchildren, starting with Ryan in 1988 then followed by Ross, Raelle and Klark through the 90's. In 2002 her final grandchild, Braxtyn was born. Laureen became a Great-Nanny with the addition of Addy Rose and, only a month ago, Elizabeth Lane. Laureen loved music, family gatherings and providing hospitality to her many friends.

She was predeceased by her daughter, Elaine in 1980 and just over six months ago by the love of her life, Ross.

Laureen is survived by her three sons and their families, her sister,Diana Cannon and her husband Glenn, brother, Russ and Auntie Berla. Laureen believed in the Bible's promise of an earthly resurrection of the dead in the near future. She believed that God's Kingdom government will soon take control of the earth's affairs and transform it into a paradise where pain and death will be no more (Rev 21:3,4)