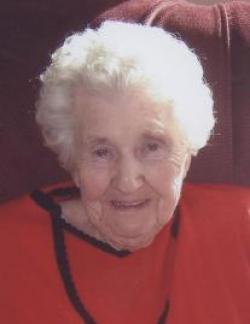 Born in Tiverton NS, December 22, 1914, a daughter of the late Judson and Mary (Elliot) Robbins.

Predeceased by two sons, Randy and Harold, one daughter, Joyce, three sisters and one brother.

Funeral service will be held at the Union Street Atlantic Baptist Church, Union Street, St Stephen, NB on Friday, August 22, 2014 at 11 AM.

Family will receive friends at the church on Friday from 10-11 AM.

For those who wish, remembrances to the St Croix Vocational Centre Building Fund would be appreciated by the family.