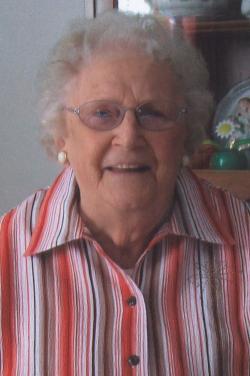 It is with sadness, the family of Annie Kathleen Weatherby of St. Stephen, NB announces her passing, which occurred on June 12, 2014 at the Charlotte County Hospital, St. Stephen, NB.

Wife of the late Herbert Weatherby and daughter of the late James and Maude (Johnson) Cook.

Resting at The S.O. Mehan & Son Funeral Home, 23 Main Street, St. Stephen, N.B. from where the funeral service will be held on Monday, June 16, 2014 at 2 PM. Following the service, the Royal Canadian Legion Branch #9 Ladies Auxiliary will conduct a service.

Visiting hours will be held at the funeral home on Monday from noon to 2 PM.