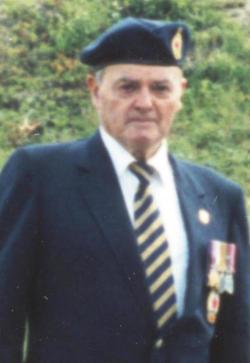 The Wilson family is sad to announce the peaceful passing of Herbert Wilson, of McAdam NB, at the Oromocto Hospital on March 26, 2014.

He was a veteran of the Second World War and was employed as a carman for the Canadian Pacific Railway until his retirement. Herb was a proud member of the McAdam Royal Canadian Legion Branch #7. An avid hunter and fisherman, his many amusing stories will be remembered by all who had the pleasure of knowing him.

He was predeceased by his daughter Ivy May, and his brother Arleigh.

The family would like to express their sincere appreciation to the staff of the Oromocto Hospital and the Wauklehegan Manor in McAdam.

A reception will follow at the church. Interment at Rockland Cemetery, McAdam, NB.

For those who wish, in lieu of flowers, donations can be made to the Canadian Cancer Society, the McAdam Royal Canadian Legion Branch #7 or a charity of the donor's choice.