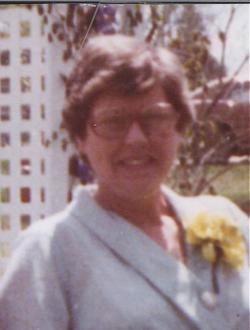 Born in Brownville Junction, Maine on October 18, 1929, Margaret was the eldest daughter of Austin and Margaret (McCann) Cosman.

She will be sorely missed by her two surviving sisters, Jean Grant and Mary Anne Bailey; her two sisters-in-law, Margaret Cosman and Barbara Cosman, and many nieces and nephews.

Margaret was predeceased by her two brothers, Bill Cosman and Fred Cosman.

Margaret taught in a one room school house near Woodstock, NB before she married the love of her life, Ralph Annis, a handsome RCAF pilot, in 1951. As an air force wife, Margaret travelled extensively across Canada, the USA and throughout Europe. Her five children were born in England, Germany, Quebec and Alberta. Margaret moved house 29 times, over 31 years, before she and Ralph retired to McAdam, NB, in 1979. Margaret continued her love of travelling by visiting her children in Vancouver, Nanaimo, Moose Jaw and Phoenix, Arizona. Margaret was a doting grand-mother who thought her grandchildren were the most brilliant and photogenic children in the world and she produced photographs to prove it. Margaret was the family story-teller with a lifelong exceptional memory. She loved to entertain from throwing garden tea parties to formal dinners. Margaret was a gourmet cook who picked up recipes during her travels abroad and enjoyed experimenting with unusual foods such as spatzel, snails and frogs legs. The family camp on Palfrey Lake was a favorite spot for family and friends for swimming, barbeques, cribbage tournaments and lobster boils. Most of all Margaret loved to spend time with her immediate and extended family and the countless friends who crossed her life's path - sharing stories and serving a good cup of tea.

By personal request, there will be no visitation.

Interment at Rockland Cemetery, McAdam, N.B., at a later date.

For those who wish, remembrances to charity of one's choice would be appreciated by the family.