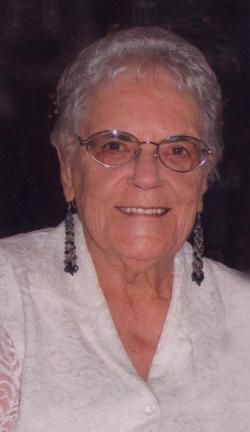 With great sadness, the Boucher family announces the peaceful passing of Marie "Bertha" Boucher, at the Saint John Regional Hospital, Saint John, N.B, on March 27, 2014, with her family by her side.

Born in St. Francois, N.B. on May 3, 1925, she was the youngest child of the late Arthur and Christine (Michaud) Milliard and the wife of Armand Boucher of St. Stephen, N.B.

Predeceased by her parents, and fifteen brothers and sisters.

Mass of Christian Burial will be celebrated from St. Stephen Roman Catholic Church, Milltown Blvd., St. Stephen, N.B. on Tuesday, April 1, 2014 at 11 AM.

For those who wish, remembrances to the Alzheimer Society, Charlotte County Cancer or a charity of one's choice would be appreciated by the family.