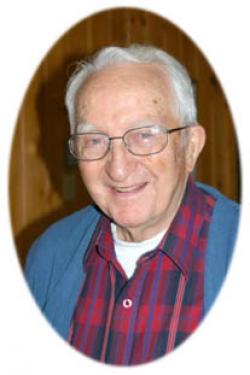 The McCracken family is sad to announce the peaceful passing of James Campbell McCracken at Wauklehegan Manor in McAdam, N.B. on March 25, 2014 in his 91st year, after a brief illness.

He was a much loved and loving husband, father, grandfather, great-grandfather, brother, uncle, and a friend to one and all.

Born in Fredericton Junction, NB on July 5, 1923. He spent his formative years in the Junction and completed high school before joining the CPR as a telegrapher. Prior to moving to McAdam in 1948 to take over the highly sought after '1st trick' telegraph operators position, he 'operated' in communities as diverse as Musquash, Pennfield, Welsford, Harvey and McAdam in New Brunswick, Brownville Jct. in Maine, the Boundry on the Maine/Quebec border, and Delamere in Ontario. He was appointed the CPR Agent in McAdam in 1958, the General Agent in 1970 and the Rail Terminal Supervisor in 1981 before retiring in 1983 after 42 years with the CPR. In addition to devoting a great deal of his leisure time to his family, he made community involvement a focal point of his life in McAdam. He took on leadership roles with many local organizations, including the Boy Scouts, St. George's Anglican Church, the McLean Memorial Hospital, the McAdam Station Historical Association, and many other community projects and initiatives. A very proud and active Mason since 1946, he held various offices, including Worshipful Master twice, with Ashlar Lodge #36 in McAdam. He also belonged to other Masonic organizations including Luxor Temple Shriners. As an avid outdoorsman he particularly enjoyed great experiences with his family and friends, often taking the lead in fishing, hunting, ski-doo and ATV expeditions. Through it all, he developed many lifelong friends and the endearing respect of his entire family.

He is survived by Sadie (nee Howe), his true love, best friend and wife of 66 years, his children Danny (Evelyn) of Fredericton, NB, Tony (Rose) of Bridgewater, NS, David (Jane) of Ottawa, ON, Paul (Verna) of New Glasgow, NS, and Karen Dawson (Cameron) of Welsford, NB, two sisters, Myrtle (Joey) Wright of Fredericton, NB and Ethel McCracken of Revelstoke, BC, 18 grandchildren, 32 great-grandchildren and many more nieces, nephews and friends.

He was predeceased by his parents Arthur and Loretta (Brawn) McCracken, his sister Helen, and brothers Arthur, Lawrence, Vance, Harvey, Charlie and Lloyd. The family would like to express their sincere appreciation to the staff of Ste Anne's Court in Fredericton and the Wauklehegan Manor in McAdam for their excellent and very special support and care.

The funeral service will be held at St. George's Anglican Church, McAdam, N.B. on Saturday, March 29, 2014 at 2 PM. Ashlar Lodge #36 F & AM will conduct a Masonic service on Saturday at 1:15 PM. For those who wish, in lieu of flowers, donations to St. George's Anglican Church, the McAdam Historical Society, the Shriners, or a charity of the donors choice, would be appreciated by the family.

Personal condolences may be sent to the family online at www.mehanfuneralhome.ca