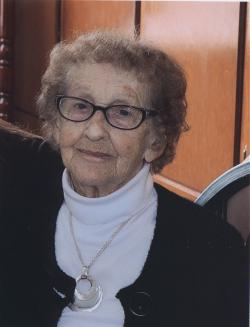 Evelyn was born March 3, 1918 at Pennfield, N.B. The daughter of the late George and Maude (Trynor) Young.

At the age of 12, she moved to Milltown, N.B. to live with her sister until she married the late Alton Hewitt in 1936. She moved to Rolling Dam, N.B. where they had three children, Arnold, Darrell and Linda. Later, she and her husband moved to Calais, Maine in 1966. She was employed many years at the Calais Regional Hospital as a certified nurses aide. She was a member of Rolling Dam United Church of Canada, Kirk McColl United Church, Junior Ladies Auxiliary St. Croix Branch No. 9 in St. Stephen, the Royal Canadian Legion St. Croix Branch No. 9 in St. Stephen, St. Croix Valley Senior Citizens Club, Happy Gang Seniors in Calais, Maine and a member of the seniority of the Calais Hospital.

She was predeceased by her husband, four brothers and two sisters.

For those who wish, remembrances to the Charlotte County Cancer or a charity of one's choice would be appreciated by the family.