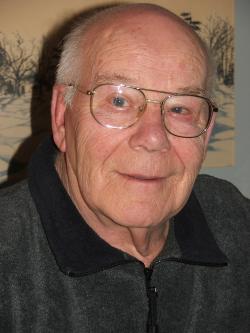 Lankisch, Charles Karl Heinz, 1935-2014, St. Andrews, NB. It is with great sadness that we announce that Charles Karl Heinz Lankisch, much beloved father and grandfather passed away on February 15, 2014 at Lincourt Manor, St. Stephen, N.B.

Born in Berlin, Germany on January 12, 1935, Charles arrived in Canada for a new life of opportunity in April, 1954. Working his way from mining surveyor to blasting foreman for the Iron Ore Company of Canada in Schefferville, Quebec to pit foremen for Brunswick Mining in Bathurst, New Brunswick. Charles enjoyed his early years working in wide open spaces with big machinery and the occasional opportunity for excellent fly fishing. In partnership with his wife Marianne, they embarked on a new adventure in 1969 when they purchased their first motel in Campbellton, New Brunswick. In 1973, they set out for a more southern climate and began their lives in St. Andrews to raise their family and build their business, the Blue Moon Motel. Charles also found time to be a representative for PanAbode west coast cedar log homes that he not only helped build but also incorporated into the expansion of the Blue Moon Motel. Through hard work and dedication, together they built up their business to include a restaurant and second motel, the Picket Fence in 1982. Charles always enjoyed their guests and was never shy about trading a travelling story or sharing an opinion on politics with the many people he met over the front desk. Charles was very active in the St. Andrews Chamber of Commerce as past director and president. His pride and joy was his creation of the St. Andrews Trade Dollar program which still exists today as the oldest municipal trade dollar program in Canada.

Charles was predeceased by his loving wife Marianne of 49 years and is survived by son, Gordon (Kim) and daughter, Susan (Vernon Lister) both of St. Andrews. Opa will be missed by three wonderful grandchildren Sampson, Isaac and Zeke all of St. Andrews.

Donations in his memory can be made to Dragonfly Centre for Autism, Lincourt Manor Nursing Home Memorial Fund or a charity of one's choice.