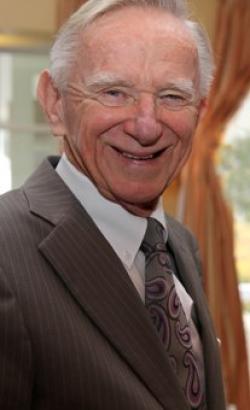 Jed started his career in the grocery business, like his father (Maynard) and his grandfather (Jim"Papa"). He began in the position of meat cutter, but would soon leave that business behind and, in 1952, embark on a long and very successful career at the Bank of Montreal St. Stephen branch. His banking career spanned more than 40 years, and included 29 years at the Bank of Montreal and 8 years at Canada Trust, as well as several other senior executive assignments at Royal Trust, Family Trust, and Manulife Financial. Through his busy family and work life, Jed also took the time to share his"let's get the job done" skill set with many organizations like the United Way, Share Life, Charlotte County Hospice, Charlotte County Civic Centre project, and the Milltown Superior School Legacy Scholarship fund, being involved in very successful fundraising campaigns. Although Jed's career and family life led him to live in all parts of Canada (Toronto, Montreal, Vancouver, Newfoundland, New Brunswick and Nova Scotia), every summer he and his family would all return home to St. Stephen. Whether it was staying at the family homestead "The Big House" in Milltown, NB with his Dad and Aunt Eileen, camping at Oak Bay Causeway campground or, finally, the family cottage facing Spoon Island in Oak Bay, he made sure to introduce his young and growing family to his beloved hometown. He instilled in them a great desire to return as adults with children of their own, thus ensuring a beloved family legacy of summer enjoyment.

Jed's last career assignment was that of Mayor of the Town of St. Stephen. He felt so very privileged to be commissioned by the good people of St. Stephen to lead the town through a time of change and revitalization. This leadership, along with the hard work of countless others, resulted in the construction of a multi-million dollar civic centre for the people of Charlotte County.

Mass of Christian Burial will be celebrated from St. Stephen's Roman Catholic Church, 407 Milltown Blvd., St. Stephen, N.B. at 11am on Monday the 27th of January.

Interment at Milltown Roman Catholic Cemetery, St. Stephen, N.B. In lieu of flowers, the family has asked that donations be made to the Charlotte County Hospice and the St. Croix Vocational centre, both organizations Jed was very supportive of. Jed enjoyed singing, and one of his favourites was Frank Sinatra's "My Way". Jed/Dad/Papa, you really did it your way! We are so very proud of you! You've set the bar so very high for all of us! We love you!