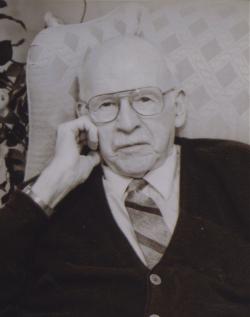 KNIGHT - The family of Scott E. Knight sadly announce his death on December 15, 2013 at Kings Way Care Centre, Quispamsis, N.B., where he has most recently resided after leaving his community of St. Stephen, N.B., in 2006.

Scott was born at Mill Cove, N.B., in 1919, to Samuel and Gertrude (Colwell) Knight and learned his life lessons about family, community, gardening and all around love of outdoors while he grew up in White's Cove, N.B., with his four sisters, Mila, Irene, Dorothy and Jean, along with three brothers, Arthur, Claude and Holly, who is his only surviving sibling.

Scott first married Elva Stannix of McAdam, N.B., in 1944, but was sadly widowed only 3 years later. In 1952, he married Katherine Crotty (deceased in 2000) and they had their daughter, Maureen Liana.

Leisure time was spent "puttering" at home or socializing in his 'piece of heaven' at "Suits Us" on Magaguadavic Lake. Children quickly recognized his gentle ways and he became a surrogate dad and mentor to many over the years. His extended family includes David and Marilyn Essensa, Jane and Tom Reid, and Suzanne and Paul Gogan and their families, along with Holly and the Knight Clan of dearly loved nieces and nephews, cousins and long-time friends across North America.

Scott was proud to be employed with Canada Customs and Immigration from 1955 until he retired from his St. Stephen posting in 1982. Scott was elected to the St. Stephen Town Council in 1969 and served on the first amalgamated St. Stephen - Milltown Town Council 1974-1977. His volunteer work was deservedly acknowledged in 1991 when he received the Town of St. Stephen Volunteer Appreciation Award. As a member of Holy Rosary Parish, he served on Parish Council and also became "the go-to guy" for maintenance and repair solutions. He was honoured to received the Bishop William Dollard Medal of Merit from the Diocese of Saint John.

A Funeral Mass of Christian Burial will be celebrated at the Holy Rosary Roman Catholic Church, Union Street, St. Stephen, on Saturday, December 21 at 11 AM.

A reception will immediately follow the service at the Holy Rosary Parish Centre and interment will be at a later date.