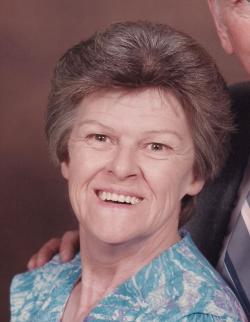 McLaughlin, Phyllis Louise, 77, went to her heavenly home on Thursday, September 5, 2013. She passed peacefully with family by her side at the Dr. Everett Chalmers Hospital, Fredericton, N.B., Canada. She was the beloved wife of the late Marvin J. McLaughlin.

Beloved wife, mother, grandmother and friend. She will always be remembered for her kindness and devotion to her family and friends. She will be dearly missed by all who knew her. Phyllis was born June 26,1936 in McAdam, NB, Canada. Daughter of the late Thomas and Doris (Scott) Adams. Phyllis lived in Meriden from 1965-2005 before returning to McAdam, NB. She is survived by her two daughters, Jo-Anne Barrett and husband Jeffrey of Meriden and Carolyn Festa of Simsbury; three granddaughters, Courtney Barrett, Jamie Kuhns and Alicia Daubert; two brothers, Arnold Adams (Gloria) of McAdam, NB and Travis Adams (Shirley)of Perth Andover, NB; two sisters, Christina Laking (Guy) of McAdam, NB and Arlene Ross of Targettville, NB; several nieces and nephews.

She was predeceased by her husband, parents, one brother and four sisters.

Memorial service and burial will be held Saturday, September 14, 2013 at 11AM at The Walnut Grove Chapel, Walnut Grove Cemetery, 817 Old Colony Rd., Meriden, CT Should friends and family desire, contributions may be made in her memory to a charity of one's choice.