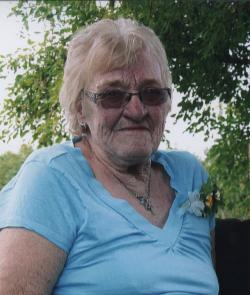 She was predeceased by her loving husband, Pat of 47 years; sons, John and Allen; brother, Louis; 2 daughters-in-law, Sandra and Judy.

Grace attended the local school at St. David Ridge and then worked at various jobs in St. Stephen until she met and married the only love of her life. Through the years, they lived on Sorrel Ridge, St. David Ridge and lastly, Rolling Dam for over a half century. In her later years, she found a love of travel, visiting 34 US states and seven foreign countries. She also devoted many hours as a volunteer to local groups such as the Legion and the Catholic Women's Auxiliary. In her younger years, she managed to find the time to raise and care for a full house of family, relatives and friends, always paying more attention to the needs of others than of herself.

In lieu of flowers, remembrances to the Royal Canadian Legion or a charity of one's choice would be appreciated by the family.