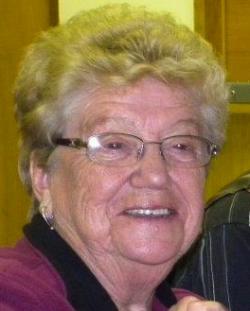 B.Jean Hay of McAdam, N.B., surrounded by her family, with love and prayers of family and friends, wrapped in a quilt lovingly stitched by friends, Mom quietly slipped away after a short but fierce battle with cancer, at the Dr. Everett Chalmers Hospital, Fredericton, N.B, on June 11th, 2013.

Born on July 7th, 1934, she was the daughter of the late Elmer and Ruth (Speedy) MacDonald and wife of the late Douglas Hay. Survived by her children, Lori (Rick) Wightman of Fredericton, Larry (Bev) Hay of Bedford, NS, and David (Tina) Hay of Dartmouth, NS; grandchildren, Jerry, Jake and Dylan Wightman, Geoff, Ryan, Alli and Erin Hay, and Carolyn (Cody) Hall; brothers, Keith (Lil) Anderson and Angus (Mary) MacDonald; sister-in-law Hazel(Vail) Brown; her friend and companion, Gordon (Duke) Rushton; as well as numerous cousins, nieces and nephews. Mom/Gram drew on her faith to provide guidance to all of us throughout our lives and while we will miss her, we know she is in a better place.

In lieu of flowers, donations to the Rockland Drive United Baptist Church or a charity of your choice would be appreciated by the family.