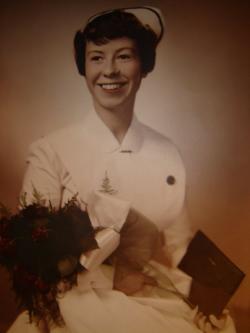 The death of Victoria (Vicky) Frances Jones of Wauklehegan Manor, McAdam, occurred on Monday, June 3rd, 2013. Born in St. Stephen, New Brunswick, 75 years ago, she was the daughter of the late Harold T. and Lois R. (Malloy) Jones.

Vicky grew up in McAdam, where she was active in the community (Girl Guides and concerts) and the church (CGIT and choirs). After graduating from McAdam High School in 1955, she became a registered nurse, graduating from the Charlotte County Hospital School of Nursing in 1959. Post-graduate study in psychiatric nursing took her to Waverley, Massachusetts, after which she was employed at the Charles Choate Memorial Hospital in Woburn, Massachusetts. Returning to McAdam in the early 1970s, she worked at the Charlotte County Hospital and then Wauklehegan Manor until her retirement. Vicky is survived by her companion Manford Cogswell; her three daughters: Stephanie of Rhode Island, Brenda (Tommy Donahue) of McAdam, and Debra of Fredericton; her five grandchildren: Brandon, Cody, Blake, Brianna, and Brennan; her brother Theodore (Ted) Jones and wife Anita of Fredericton; her nephew Adam Jones and his wife Natalie of Fredericton; and several cousins.

The remains will be resting at St. Paul's United Church in McAdam, with visitation on Friday afternoon (June 7th) at one o'clock, the funeral to follow at 2 pm from the church, with Sue Breisch officiating.

A reception will take place in the church hall following the interment in the Rockland Cemetery, McAdam.

The family would to thank the staff at Wauklehegan Manor for the care and support given to Vicky over the past ten years.

In lieu of flowers, remembrances can be made to the Parkinson's Society, the Cancer Society, or the charity of the donor's choice.