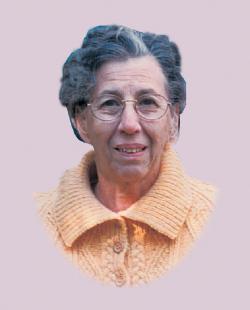 JOHNSON- Helen E. Johnson passed away peacefully on March 6, 2013 at Lincourt Manor, St. Stephen, NB. Born in 1919 at Elmsville, NB, she was the daughter of the late William and Rosetta (MacFarlane) Gowan and wife of the late Joseph Frederick Johnson.

Resting at the All Saints Anglican Church, St. Andrews, NB from where the funeral service will be held on Saturday, March 9, 2013 at 2 PM. Visitation will be held at the church on Saturday from 12-2 PM.

For those who wish remembrances to the Alzheimers Society, Charlotte County Cancer Society or charity of one's choice would be appreciated by the family.