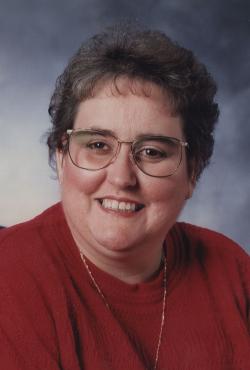 After a period of failing health, Lorna passed away at the Charlotte County Hospital, St. Stephen, N.B. on February 22, 2013. She is the daughter of Pat Lee and the late Douglas Lee.

Lorna was born on July 21, 1954 in St Stephen, N.B. Everyone who knows Lorna admires her courage, determination and perseverance in her efforts not to give up during her many years of trying to manage with her mobility problems, her continuing health problems, her numerous hospital stays, and her many operations. But she was a fighter and maintained her sense of humour and her ability to laugh throughout the difficult times. Lorna attended school in Milltown, graduated from St. Stephen High School and St. Thomas University. She also attended the Atlantic School of Theology in Halifax. After university, she did ministry work at the Crane Valley United Church in Saskatchewan. She even drove there in her specially equipped hand controlled car. She also worked for several years as an Income Assistance Officer with the Department of Social Development, but had to stop because of her health problems. Lorna was a people person. She made friends with many, many people and was an expert at continuing these relationships. She communicated with many via cards, letters and especially through the Internet. It enabled her to reach out to her friends and connections at home and around the world, and she always kept a large supply of cards to send to her friends on their special occasions.

She will be sadly missed by her mother, Pat; her brother, Bob and his wife, Mary Ellen; her nephew, Ian Lee and wife, Sarah; her niece, Erin MacLean and husband, Andrew; and by her three grand nieces, Maeve Lee, Rowyn MacLean and Blythe Lee, who were a constant joy to her; also four aunts, one uncle, several cousins and by her numerous friends and care givers who helped her in so many ways.

Remembrances can be made to the donor's choice. Condolences may be sent to the family online at www.mehanfuneralhome.ca