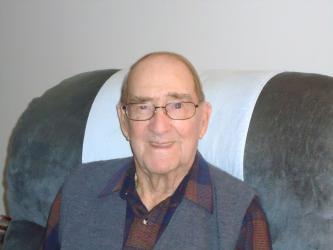 Besides his parents, he was predeceased by one sister, Margaret, and two brothers, Charles and Vincent. He was the last surviving member of his family. After growing up in Whittier Ridge, he taught school for a short time in Rolling Dam before serving in the navy until 1945. He attended commercial school in Saint John, N.B. and married Evelyn Collins in 1948. They lived in St. Stephen. Eldon worked at Lawson Motors and then for C.P. Express until he retired after 35 years of service. He and Evelyn also owned and operated Nixon's Variety Store on King Street in St. Stephen for a number of years. Eldon was an avid gardener and also enjoyed dancing. He and Evelyn enjoyed many evenings at the legion dances. After retiring, they travelled and spent many happy years at Island View Campground with friends and family. For the last seven years, they have been residents of 21 River Street apartments.

For those who wish, remembrances to Kirk McColl United Church or a charity of one's choice would be appreciated by the family. Condolences may be sent to the family online at www.mehanfuneralhome.ca