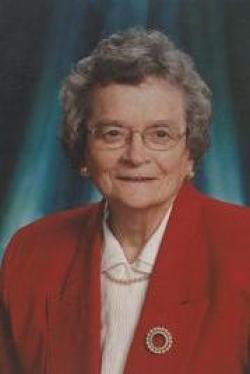 At the Charlotte County Hospital, St. Stephen, N.B, on December 7, 2012, Rena Alberta Thomas passed away at the age of 92.

Born in St. Stephen, N.B. in 1920. She was the daughter of the late Albert and Adelaide (Hay) Thomas.

Rena's career, after teaching three years, was with the Federal Public Service which took her from New Brunswick to Alberta, the Northwest Territories, and British Columbia. In 1969, upon retirement, she returned to St. Stephen where she has resided for the past 43 years.

Rena was actively involved in the KM Club of Kirk McColl United Church, the Charlotte County Hospital Auxiliary and bridge.

She will be sadly missed by her nieces and nephews, and her many friends.

The funeral service will be held at the Kirk McColl United Church, King Street, St. Stephen, NB on Friday, June 14, 2013 at 2 PM.

The family would like to thank the hospital staff and Extra Mural nurses for their care.

In lieu of flowers, donations may be made to the IWK, the Fundy Region Transition House or a charity of one's choice would be appreciated by the family. Condolences may be sent to the family online at www.mehanfuneralhome.ca